In Our Head Facts- Brain Dominance

In an age where a 140 character message can spread around the world like the wildest of wildfires or a pizza-slice can transform into a bikini model with the artistic flare of a photo-shop engineer, we should be adept at closing our ears to hearsay and tattle and all sorts of false truths. Every now and then however the intuitive appeal of certain ideas tend to seep through even the most stringent of BS filters, making their way into a common garden of popular misconceptions.

One such idea is the weed of a notion that one side of our brain is more functionally dominant than the other resulting in individual differences in traits such as creativity, analytic ability or orderliness.

With Facebook statuses sharing results from BuzzFeed brain-dominance tests, professional write-ups detailing the personality traits of those who use one hemisphere of their brain more so than the other, even guidance counsellors basing career recommendations on tests of brain-sidedness, this myth just wont die.

END_OF_DOCUMENT_TOKEN_TO_BE_REPLACED

Filed under 2014, In Our Head Facts, Individual differences

In Our Head Facts- Asymmetry

To break up the time between main blog instalments I thought a nice addition to All In Our Head would be short weekly posts featuring established, but often little known, brain facts. To begin this planned series I have for you one of my favourite snippets of information concerning the anatomy of the brain…

Your brain, my brain, Putin’s brain, Obama’s brain, all brains, are in fact, asymmetrical. Despite being encased in a largely symmetric skull, the human brain is broader on the right at the front and broader on the left at the back. It also slightly juts forward and backward 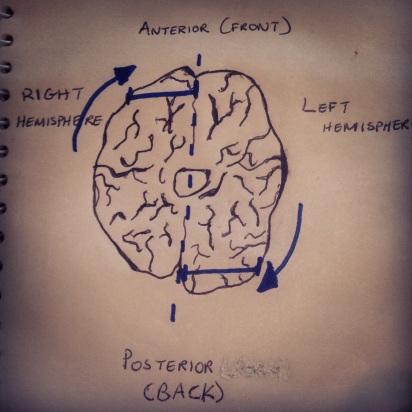 Cross-sectional sketch of the asymmetric brain

It’s almost as if someone has taken it out of its skull box, given it a sharp twist, and placed it gently back in again… 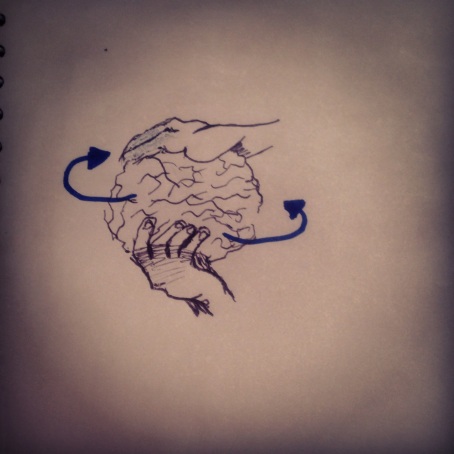 Researchers have taken this as evidence for the profoundly divided nature of the brain. If the two sides of the brain didn’t evolve to serve different purposes than some bits of one side wouldn’t be so distinctly and consistently different in size to the same bits of the other, or so the reasoning goes.

As depicted in the first picture above, the brain is divided down the middle by the midsagittal plane. Research, such as that done on split brain patients, has shown that the hemispheres on each side of this split do indeed serve certain differing functions. Unfortunately this idea has seeped like mercury into the veins of popular media, poisoning the general public’s understanding of what is really meant by the term “divided brain”.

This important subject requires an essay of its own to adequately explain, one I hope to provide in an upcoming blog post…do call back then.

Filed under In Our Head Facts